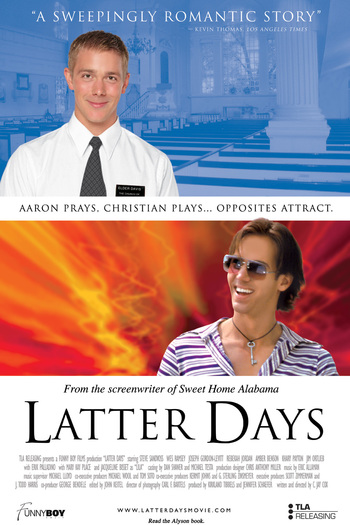 What do you get when red and blue mix?
Advertisement:

Aaron Davis (Steve Sandvoss) is a Mormon missionary who has just moved to Los Angeles with three other missionaries (one of them played by Joseph Gordon-Levitt) in a small apartment. They aren't allowed any television, radio or anything that might lead them to temptation for the two years that they are working as missionaries. The problem is their openly gay next door neighbor, Christian Markelli (Wes Ramsey) and his roommate, Julie Taylor (Rebekah Johnson).

Christian gets into a bet that he can seduce one of the missionaries. Little does he know that Aaron is a closeted homosexual. They fall in love but deal with a lot of problems along the way.