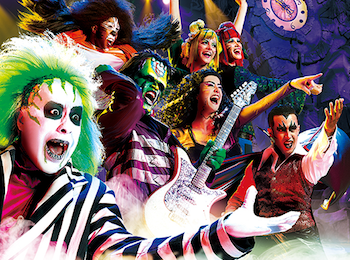 It first opened at the Florida and Hollywood parks in 1992, in response to the positive reactions the parks' walkaround Beetlejuice character had gotten from guests. In Hollywood, the show continued to operate until 1999, when it was quietly closed down. The show lasted far longer in Florida, where it also went through several different revisions. The first revision occurred in 2002, which saw some of the show's songs being changed and the Phantom of the Opera replaced with Hip and Hop, two characters that serve as backup dancers for the band. The show received minor revisions again in 2006, and later bigger ones in 2014, which included replacing Hip and Hop with Cleopatra and Phantasia, the daughter of the Phantom of the Opera. This would end up being the final version of the show, as it was closed on January 5, 2016 to make room for Fast & Furious: Supercharged, which opened two years later in 2018.

The show continues to operate at the Japan park, under the name, Universal Monsters Live Rock and Roll Show.