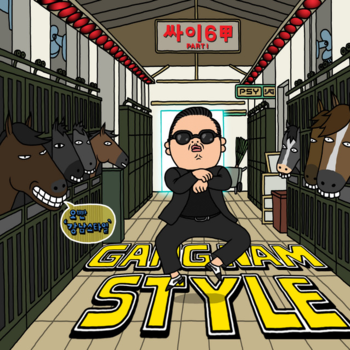 The title of the song refers to the Gangnam District, a neighborhood in the South Korean capital Seoul that is well-known for being affluent and extravagant. In Korean, the term "oppa" means "big brother", and it is a term of endearment used by women to refer to their boyfriend. Therefore, when Psy is saying "oppa Gangnam style", he is really saying "[Your] Big Brother has Gangnam style". So basically, he is referring to himself in the third person, and telling the ladies to come check him out because he "has Gangnam style", meaning that he is wealthy and spectacular, like the inhabitants of the Gangnam District. Fitting, since Psy himself is actually from there.

This song — and the accompanying music video — provides examples of the following: