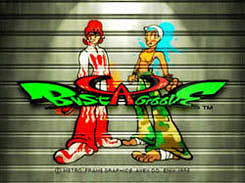 My, what big feet they have.
Bust a Groove (known as Bust a Move in Japan) is a series of rhythm games released by Enix (now Square Enix). The first two games were released for the PlayStation and the third on the PlayStation 2. The games feature character designs by Hideyuki Tanaka, director and character designer for the anime Super Milk Chan.
Advertisement:

The first game focuses on ten dancers and the mysterious "dance energy" known as Groovetron. The goal of the game is to dance battle your way to the final boss and become no. 1 dancer. The characters in this game are Frida, Heat, Gas-O, Hamm, Hiro, Kelly, Kitty-N, Pinky Diamond, Shorty, and Strike. Included also are four hidden characters: Burger Dog, Capoeira, Columbo (No, not that one.), and the final boss, Robo-Z.

The second game pretty much removes what little story the previous game had and focuses more on the character's lives in a series of This is Your Life-esque endings. Sadly, they were cut out of the North American release. In this game, Frida, Gas-O, Hamm, and Pinky are gone and replaced with Comet, Bi-O, and Tsutomu. There are also new playable characters: ChiChi and Sally, Hustle Kong, McLoad, Michael Doi, Sushi Boy, and Pander. Columbo also makes a return with Burger Dog as a cameo.

The third game in the series is Dance Summit 2001. This time, none of the dancers from the previous two installments make an appearance (save for Strike and Burger Dog, who make cameo appearances on Jumbo Max's stage). It features a whole new cast and focuses more on team dancing. Also unlike the first two, it has no endings. And it was only released in Japan, meaning it's the more obscure of the three. In this game, there are a total of eight teams of four: The School Mates, The Data Bebops, CusuCusu, The Flower Dancing Team, Galaxy 4, Discos Estrus, Jumbo Max, and The Far East Commanders.

All three games also feature DJs that serve as announcers. DJ Kickn' in the first. DJ Dangerous and DJ Mix Deadly in the second. And in the third, DJ Donna Burke. Yes, that Donna Burke.

The first two games were a moderate success, with the third being something of a Scrappy to the series, due to the new characters, gameplay, and recycled dance moves. Though it has its own cult following, as well.

Whether Square Enix plans on making a new game in the series is unknown (and probably unlikely).