Recap / Buffy the Vampire Slayer S6E7 "Once More, With Feeling" 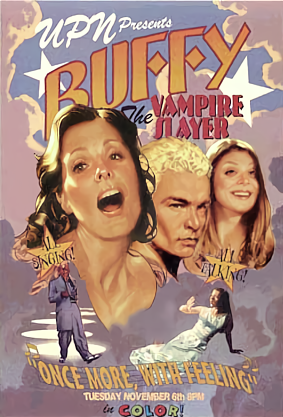 "...we will walk through the fire, the point of no return, and we will walk through the fire, and let it burn."
Dawn: "Oh my god! You will never believe what happened at school today."
Buffy (without looking up): "Everybody started singing and dancing?"
Dawn (miffed that everyone already knows): "...I ...gave birth to a pterodactyl."
Anya: "Oh my god! Did it sing?"
Advertisement:

Buffy is patrolling in a cemetery at night but notices something wrong with her and the demons and vamps she's fighting; they're all singing and dancing. Buffy sings about her life after returning to Earth and how she feels detached from it ('Going Through The Motions').

The next morning, the gang find out the same thing has happened to them all. They suddenly burst into song, first wondering what could be the cause ('I've Got A Theory/Bunnies') and then, guided by Buffy, their ability to deal with it together ('If We're Together'). They then learn that it's not just happening to them but the whole of Sunnydale are singing and dancing about their inner feelings ('The Mustard').

Later, Tara sings Willow a love song about the difference she's made in her life ('Under Your Spell'). Xander and Anya sing about things they would never have otherwise told each other, such as their worries over their upcoming marriage ('I'll Never Tell'). Spike sings to Buffy about the torturous nature of their relationship ('Rest In Peace').

Unfortunately, some people are singing and dancing so much that they spontaneously combust because of the dramatic release of their pent up emotions.

When Dawn gets home from school, Tara tells her that it looks like a demon is responsible for the forced singing in Sunnydale. Dawn mentions to Tara about her recent argument with Willow but Tara doesn't remember anything about it. She suddenly begins to worry that Willow may have cast a spell on her and rushes off to find out if her hunch is true. Meanwhile, Dawn is left alone and goes through her stash of stolen things. She wears a necklace stolen from the Magic Box but is kidnapped by minions of the demon, Sweet who interrupt her song ('Dawn's Lament').

When she wakes up at the Bronze, Dawn engages in interpretive dance with Sweet as a means of escape. Sweet tap dances as he sings and explains that he thinks Dawn is the one who summoned him and he wants to take her home and make her his queen. He explains that if the melodies go on too long, people will explode from the release of emotions ('How You Feel'). Dawn tells him that her sister is the Slayer which seems to please and not scare him. He tells his minions to bring Buffy to him so he can watch her burn.

Meanwhile, Buffy trains with Giles at the Magic Box in case she has to fight whatever is causing the singing. Giles asks if Buffy had spoken to Dawn about her misbehaviour on Halloween but Buffy replies that she thought he had sorted it. Giles realises that Buffy is dependent on him being around and sings (only heard to himself) that he cannot let Buffy become emotionally dependent on him and that he will leave for England for good ('Standing').

Tara looks up information on the bramble she found in her bed that morning which confirms it's used in spells to alter memory. Devastated that Willow would do such a thing to her, Tara decides she needs to end their relationship. Giles and Tara's songs merge into a duet about them leaving. They sing about how much it hurts to leave but know that they can't stay ('Under Your Spell/Standing').

However before either of them get the chance to bring the subject up, Spike arrives with one of Sweet's minions who reveals that Dawn has been kidnapped. Xander, Anya, Willow and Tara are eager to help Dawn but Giles insists Buffy must go alone. Spike dismisses Giles' stubborness and goes to back Buffy up. Buffy questions why he'd do that if he asked her to leave him alone. Spike skulks away, humiliated and tells Buffy that he hopes she burns with Dawn. Buffy leaves alone, once again singing about her inability to feel anything. Both a conflicted Spike and the Scoobies sing about their desire to fight alongside her ('Walk Through The Fire'). Arriving at the Bronze, Buffy sings and dances cynically about her current condition and the hardships of being a Slayer.

Buffy finally reveals to Sweet that, by resurrecting her, Buffy's friends had ripped her out of Heaven rather than rescue her from a hell dimension like they thought. The Scoobies react in horror, especially Willow and once Buffy has vocalised her anger and despair, she dances to the point of smoking in a somewhat suicidal bid. Spike arrives and comforts her, telling her to continue living ('Something To Sing About').

Applauding, Sweet prepares to leave with Dawn but it's revealed that it was Xander who had summoned him— not aware of his actions. This leads to Sweet telling Xander that he'll waive the clause for him to be his queen and goes back to Hell ('How You Feel [Reprise]'). As Sweet leaves, he points out that they've revealed their hidden feelings, none of them can claim it ended well. The fractured group sing of the victory they've achieved and what to do next ('Where Do We Go From Here').

The episode ends with Spike and Buffy kissing, as the curtains fall as predicted in the song's final verse.