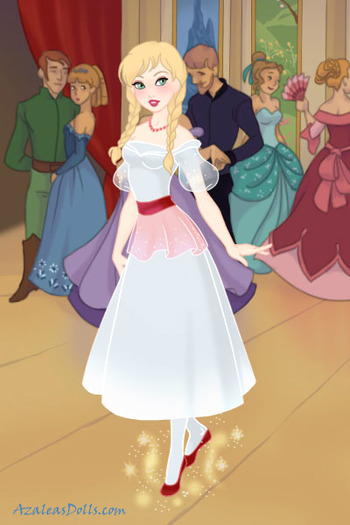 Karen doesn't know it yet, but her red shoes are about to be her unmaking.
One of Hans Christian Andersen's more sinister fairy tales. Karen is a pretty but very poor girl. So poor, in fact, that she has to go barefoot in the summer and wear clogs in the winter that chafe her ankles until they are red. Old Mother Shoemaker takes pity on Karen and makes her a pair of ungainly red shoes. Just then, Karen's mother dies and, having no other shoes, Karen wears them for the first time to the funeral, though they are inappropriate for mourning. An old lady of some means happens to pass by in her coach, sees Karen, takes pity on her, and takes her in as her ward. Karen thinks that her shoes were what drew the old lady to her, but in fact the latter considers them ugly and has them burned.
Advertisement:

At first, things seem to be going well, but then the time comes for Karen to be confirmed. When shopping for new shoes for the occasion, Karen, who has developed a vain streak, sets her eyes on a beautiful red leather pair that had been made for a count's daughter but had not fit her, and that are just like those she has seen on a young Princess when her mother the Queen had taken her through the land. The old lady buys them for her, however, she has poor eyesight and does not see that they are red, otherwise, she would never have let Karen wear something so gaudy to church. At her confirmation, Karen does not pay attention to the service, thinking of nothing except her new shoes. People notice, and gossip about it. When the old lady hears that Karen has worn red shoes to church, she tells her that it was naughty of her to do this and that in the future she is to wear her old black shoes to church. The next week, though, Karen puts on her red shoes anyway. It is the week of holy communion and again, Karen thinks only of her shoes and does not participate actively in the service. This time, however, a mysterious stranger had met Karen and the old lady at the church door: a crippled old soldier with a long red beard. He had offered to dust off the old lady's shoes and when Karen had put out her foot as well he had commented, "Oh, what beautiful shoes for dancing," and had then said to them, "Never come off when you dance," as he tapped the sole of each of them with his hand. Indeed, on leaving the church, the soldier meets them again and again says, "Oh, what beautiful shoes for dancing!" just as they are boarding the coach. Karen can’t resist trying a few steps, but soon she cannot stop dancing. The coachman has to chase her, catch her, and lift her into the coach, where she keeps trying to dance, kicking the old lady in the process. It is only when she takes her shoes off that her legs calm down. The red shoes are taken away from her and put into a cupboard.

Soon after, the old lady takes ill and is not expected to live. It falls upon Karen to nurse her, but then she gets invited to a ball and reckons that there would be nothing wicked in going. Of course, she puts on her beloved red shoes. But when she gets to the ball, the shoes take control of Karen's feet again and this time there is no stopping them. They soon make her dance out into the wide world for days on end, taking her all over the place and physically wasting her. She dances into the dark woods, where she comes across the old soldier again. He ironically repeats, "Oh, what beautiful shoes for dancing." When she dances up to the church, she finds an angel sternly guarding its doors, sword in hand, who threatens Karen that she will dance until her flesh shrivels down to the skeleton and that she must knock on the door when she comes somewhere where proud and vain children live, until they are afraid of her. Karen will have to live through physical and emotional torment in order to achieve adequate repentance for her sins.

This gruesome didactic story, written at a time when Andersen was experiencing an increase in religious sentiment, is notoriously difficult to adapt satisfactorily. Even if some of the gorier details are omitted, there is little in it that could be considered optimistic or positive enough to present to children today. Nowadays, it is more popular as a historical curiosity for adults to analyze. Among its better-known adaptations is the 1948 (adult) film of the same name. The original can be read here

Andersen's more obscure The Girl Who Trod on the Loaf about a cruel and haughty girl who sinks bodily into Hell and does penance there is a companion piece, as is Anne Lisbeth, a story about a proud woman haunted by the soul of her son, whom she had abandoned in order to care for a nobleman's son.