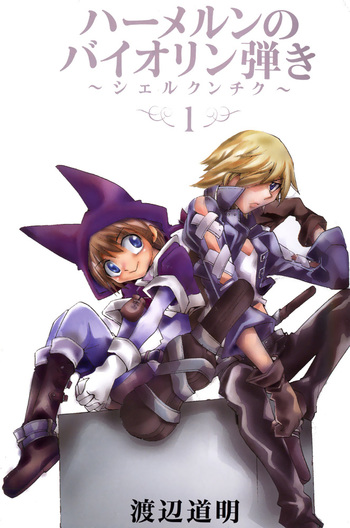 The first volume cover
"I'll become a great Mage... and change destiny!!"
— Shchel, every other chapter.

Once upon a time, there was the Great Demon King Chestra, who terrorized the world with his army of demons. But that was 20 years ago - nowadays, the world is barely bothered by some puny monsters wandering lost here and there, thanks to the Five Great Hopes and the gathered armies of all human countries. What's there left to tell?

A young boy called Shchel dreams of being a powerful mage just like Clarinet, leader of the Magicorps, who saved him from a mazoku attack 10 years ago. To achieve this dream, he travels to Sforzando carrying nothing but the clothes on his back and Piroro, his Fairy Companion. While on a train ride he comes across an aloof teenager violinist called Great, who informs him of the existence of a School of Magic in Sforzando. This encounter may have just changed their destinies.

Created by Michiaki Watanabe again. The "Shchelkunchik" subtitle is the original Russian name for "The Nutcracker" ballet. It was not as popular as the original series, and with some health problems, he ended the series rather abruptly. It only ran for 8 Volumes. Unlike the original series, only part of this series was translated into english. With the announcement of the series ending the scanlation team also stopped their work.