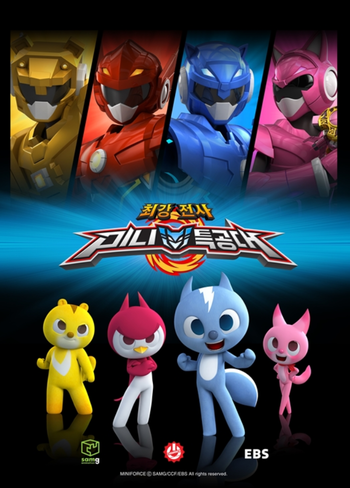 Miniforce (original Korean title: 최강전사 미니특공대, Choegang Jeonsa Mini Teuggongdae, literally “Strongest Warriors Mini Commando Squad”) is a South Korean All-CGI Cartoon made by SAMG Animation (an animation studio also known for their contributions to Miraculous Ladybug). First airing on the EBS television channel in South Korea on September 3, 2014, the show consists of two seasons of 26 episodes each (for a total of 52 episodes), with each episode lasting approximately 11 minutes each.

The show follows four main characters: Volt the squirrel, Max the beaver, Sammy the owl, and Lucy the fox. Together, they are part of an animal agent organization known as the Miniforce. They normally live at a house under the care of a human named Suzy. But when the Big Bads Nein and Pascal plot trouble and carry out evil plans around their peaceful area, our heroes come to the rescue by transforming into human-like battle suits and putting a stop to their plans, usually involving defeating another villain or a mechamon. In the second season of the show, Ray the animal chimera sometimes tags along to help the Miniforce even.

The show itself appears to take after Japanese Sentai-style Tokusatsu shows, especially the look and style of the Super Sentai/Power Rangers series, but animated and combined with an animal hero element.

A Prequel movie based on the series was released in 2016, called Miniforce: New Heroes Rise. A sequel series, Miniforce X, began releasing in April 2019. Another, Super Dino Force, premiered on Netflix in early 2021.

. The show is also available for streaming on Netflix, with the option of watching it in its native Korean with English subtitles, an English dub, and a Latin American Spanish dub (though Netflix categorizes the episodes under a single 52-episode season rather than two 26-episode seasons for some reason, so in this case "first season" refers to episodes 1-26 and "second season" refers to episodes 27-52 in Netflix order).