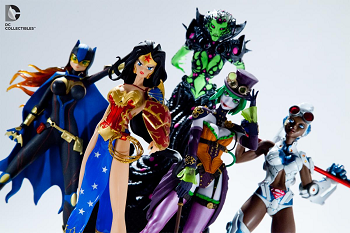 Some of the characters.
Advertisement:

Part of an attempt to cash-in on the popularity of anime and manga, Ame-Comi Girls is a line of collectible figures produced by Kotobukiya, featuring various female characters from DC Comics redesigned in an anime-inspired title. Initially starting off as a line of figures, an Ame-Comi Girls comic book series has since been launched by DC. The series is written by Jimmy Palmiotti and Justin Gray, and features art from several artists, most notably Amanda Conner.

Compare with the Marvel Mangaverse.

Ame-Comi Girls (the comic) provides examples of the following tropes: