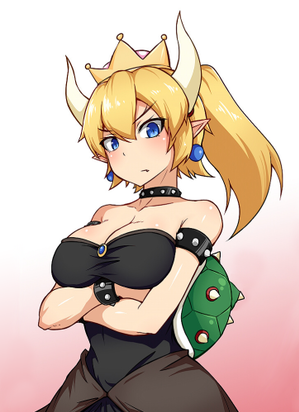 Another castle? Yeah right, your princess is right here!
Super Crown
When Toadette finds one of these, she can transform into the super-powered Peachette. (Sorry Luigi—only Toadette can use this item!)
—The in-game description. You can just ignore that last part.
Advertisement:

A lot of fanmade characters can garner significant levels of traction both inside and outside of their respective fanbases. Only one, however, got big enough to have her own Wikipedia article. (So far.)

one fine Nintendo Direct on September 13, 2018. Announcements included Luigi's Mansion 3, long-awaited ports of several formerly PlayStation-exclusive Final Fantasy titles, Isabelle joining Super Smash Bros. Ultimate, a teaser for a new Animal Crossing game (which would be known eventually as New Horizons)... with all this rejoice-worthy news, what was yet another Wii U title getting ported over to the Nintendo Switch, New Super Mario Bros. U in this case, would have gone virtually unnoticed if not for one little detail: Not only would Toadette get Promoted to Playable, but she also came with an exclusive Power-Up called the "Super Crown", which would turn her into a Princess Peach lookalike named "Peachette".

At first, it was just the Mario fan-base exploring what such a power-up means for the Mario setting as a whole, or wondering what would happen if the Mario Bros, other Toads, or even folks like Bowser used Toadette's Super Crown...

...But then the idea of Bowser using the Super Crown inspired Malaysian artist Ayyk92 to draw a comic (Twitter link

) depicting Bowser using the Super Crown, whereupon he is turned into a Peachette-esque woman (using elements from Bowser's design instead of Toadette's), and then hooking up with Mario following Super Mario Odyssey's ending. This comic then promptly exploded, with the internet quickly dubbing the character "Bowsette". Fan Art of Bowsette based on her design in the comic (as well as edits of it which retain Bowser's red hair, and alternately also tan skin to represent Bowser's yellow-brown) flooded the internet afterwards, to the point of her becoming an Ensemble Dark Horse in the fandom mere days after her inception. Meanwhile, Japanese fans dubbed her "Kuppa-hime" ("Princess Koopa") after Bowser's Japanese name, which became a top-trending Twitter and Pixiv tag in short order.note (To put into perspective how popular Bowsette became little more than a week since she was introduced, the amount of Bowser fan-art on Pixiv at that time numbered to around 3,000, while the amount of Peach fan-art numbered around 5,000. Bowsette, on the other hand, numbered at a whopping 7,000 fan-art pieces. Bowsette got more fan-art on Pixiv in less than a month since her creation than either Bowser or Peach had gotten up to that point since the website Pixiv was founded. Also of note is, in that same short timeframe, several professional manga artists joined in and drew their own art of her, including those of Dagashi Kashi, The Elder Sister-like One, Miss Kobayashi's Dragon Maid {whose mangaka Cool-Kyou Shinsha drew no less than nine different Bowsette pictures}, Tsugumomo, Pop Team Epic, One-Punch Man and the manga version of Goblin Slayer, as well as the character designer for Street Fighter and Darkstalkers.)

The Bowsette comic also quickly spawned another, separate trend of applying the Super Crown to other Mario characters and common enemies, with most recurring ones having at least one fan-art depicting a Super Crown form, as well as various Crossovers with other franchises and, of course, other memes.

She has a small mention on the

, and, as mentioned, she does indeed have a full-fledged page

on The Other Wiki. And of course, she's got a nice page

on one of the more appropriate places, Know Your Meme.

As with all memes, Bowsette eventually faded from the general community, but two closure-worthy events occured on January 11, 2019. First, Ayyk92 was rewarded with a glass trophy by Pixiv and Nico Nico Douga, as Bowsette had placed 16th in Japan's Twitter Trend Awards. Yes, really.

Second, on the same day, New Super Mario Bros. U Deluxe released... including its in-game confirmation that only Toadette can wear the Super Crown, finally jossing all the original fan theories and speculation that started this in the first place.note (This also managed to spawn a brand-new meme

in the process, albeit a smaller and largely unrelated one.)

Of course, don't let that mislead you into thinking she's completely gone or forgotten, as she's still fondly remembered by some and still gets fanart, albeit not as much as she used to. There's even an ongoing webcomic about her that has its own page, Bowsette Saga. Perhaps unsurprisingly, any new Bowser-related material tends to inspire an upsurge in Bowsette fanart, for example Doug Bowser becoming Nintendo of America's CEO, the release of Super Mario 3D World + Bowser's Fury with its new "Fury Bowser" form, or most recently the announcement that Jack Black would play Bowser in an upcoming Super Mario Bros. movie, leading to fanart of, well, Jack Black as Bowsette

open/close all folders
The Super Crown phenomenon as a whole

Princess Peach
Original Form: In theory, a Toad
What if the Princess Peach we know is just a powered-up form, similar to Peachette?
Bowsette
Original Form: Bowser
The Koopa King transformed into a Princess Peach Expy, and the Inciting Incident for this whole trend.
Queen Booette / Boosette / Princess Boo / Peachyboo
Original Form: King Boo or a regular Boo
The most popular Super Crown wearer besides Bowser. If this folder's label didn't make it clear, there's quite a bit of variation on the concept. Has a page

on Know Your Meme.
Chain Chompette
Original Form: Chain Chomp
Another popular Super Crown wearer due to the implications that come with humanizing this particular mook. Has a page

on Know Your Meme.
Piranhette / Peachy Piranha
Original Form: Piranha Plant
If it can be playable in Smash Bros., then it can wear a Super Crown. Has a page

Sonic the Hedgehog (plus other Sonic characters)

The creation of Luke Westaway from Outside Xtra, egged on by his co-host Ellen Rose.

Wario: Crygor, mass produce this thing! It's worth 10 coins!
Dr. Crygor: But is it safe?
Feedback

The Chalkeaters' song "Bowsette" is partly sung from the perspective of the titular character, proclaiming that all her evil schemes are attempts to get Mario's affection, and that Princess Peach doesn't really care about him, but she does.

The Chalkeaters' song "Bowsette" is partly sung from the perspective of the titular character, proclaiming that all her evil schemes are attempts to get Mario's affection, and that Princess Peach doesn't really care about him, but she does.