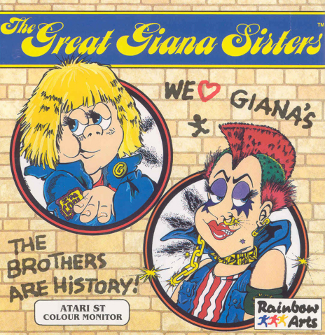 Good luck with that.
Advertisement:

The Great Giana Sisters is a platform/action adventure game from Germany. It's the first in the Giana Sisters series. It was published in the 1980s to basically cash in on Super Mario Bros. for the Commodore 64 market, since Nintendo has rarely, if ever, published games for non-Nintendo consoles.note  Super Mario Bros. Special and several other games based on Nintendo's early arcade and Nintendo Entertainment System titles were made for the PC-8801 and Sharp X1 home computers, and while Nintendo does keep to their tradition of exclusivity to this day, they have since somewhat softened their stance with spin-off instalments of their main franchises to mobile platforms.

The Great Giana Sisters is the story of Giana, an innocent little girl from Milan, Italy, who collected rubies and sapphires as a hobby. One night, an evil dragon of nightmares from Dream Land stole all of Giana's jewels and sucked her into his nightmare kingdom, where he set upon her with his army of evil owl minions, so she (along with her sister Maria, possibly) sets on a quest to re-capture her family jewels.

The original Great Giana Sisters was pulled off the shelves after threats from Nintendo. A sequel was made years later in Europe, Giana Sisters DS, and later released in the US. An unofficial sequel, Giana's Return

, has also been released.

Like Mario, Giana has a variety of power-ups to help her along her way. Her main ability is transforming from her very Alice in Wonderland-ish normal persona into "Punk Giana" (in the 1980s, a punk rock chick with a crazy mohawk and loads of piercings who shoots bubbles; in the more recent version, into a Goth that shoots fire) which allows her to shoot projectiles to subdue enemies, take another hitnote unless it's the original game and break blocks with her head. She can alter these projectiles by collecting other power-ups which give the projectiles properties like bouncing or homing. Giana can also use convenient vending machines to give her giant bottles of soda which she can spray to break through walls or attack enemies, or bubble gum to allow her to fly - provided she doesn't pop the bubble.

An official sequel, known as Giana Sisters: Twisted Dreams was released at GOG and Steam on October 23rd, 2012, with an eShop release on September 5th, 2013, and a Director's Cut disk version released on October 29th, 2015, just under three years and one week later. This one changes things up a bit by allowing Giana to switch between her normal and punk form at will. Doing so not only alters Giana's abilities, but also switches the world around her from dream to nightmare (though which is which seems to be a matter of perspective). Each world has its own hazards, and switching between the two at the right times appears to be the focus of the gameplay. This was followed by a mini-expansion pack / mini-standalone game, Rise of the Owlverlord, which adds a fourth world and boss (the titular Owlverlord who can swap between Pirate and Ninja modes) to the game.