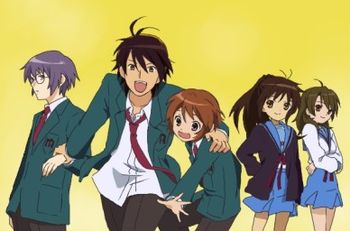 Suzumiya Haruhi no Seitenkan, or (roughly) "The Genderbending of Haruhi Suzumiya" in English, is a fan creation based on the Haruhi Suzumiya franchise that serves to tell what the universe would be like if all the male characters were female and vice-versa. Started off as just a random musing that became quite popular because of the difference in dynamics from the flipped gender roles and dynamics that gives a distinctly different impression from the original. Such as changing Kyon's cool snarks into Kyonko's cute sass.

and gave birth to the revision projects

. Also notable for having strikingly different versions of genders with Kyon(ko) [you really can't tell that they are genderflips of each other on appearance alone], that they might as well be two unrelated characters if not for the personality and origin.

Note that not everyone in the fandom uses the same gender-bent names; the main variation is "Haruhiko" for Haruhi, which is pretty common in the Japanese fandom.