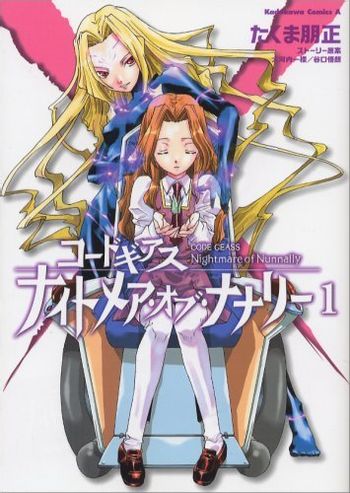 It's a Magical Girl version of Code Geass! With evil plushies. And Joan of Arc. And an even crazier Mao. And Master Asia. What'd you expect?
Advertisement:

Code Geass: Nightmare Of Nunnally is an Alternate Universe version of the original Code Geass. The story starts off the same way as the original right up until Lelouch first meets C.C. From there, Lelouch and C.C. are (presumably) killed in a nearby explosion. Nunnally, after hearing news of the explosion, heads over to the area and finds a strange doll with a Geass symbol on it. It speaks to Nunnally telling her that it's a "keepsake from her brother" and convinces Nunnally to make a Geass contract. She does, transforming herself into an Action Girl and gains the ability to see into the future, along with a katana wielding, EVA expy Knightmare Frame.

Enter a new group of Britannian agents, the "Britannian Special Honorary Foreign Legion Irregulars"; and some shiny new powerups for others.