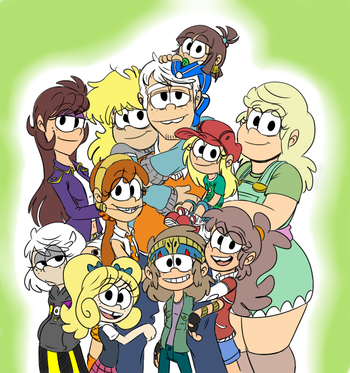 Sin Kids AU (also known as Abomination AU) is an umbrella term for the The Loud House Fan Verse ranging from fanarts, fan fiction, and games made by various authors from the series fandom centered around the lovechildren of Lincoln and one or more of his sisters. Lincoln also has children with other non-related female characters in some versions of this verse.

The Sin Kids are a bunch of Original Characters and the authors are encouraged by the larger figures in the fandom (like the creators Scobionicle99 (or SB99), Patanu102 and JumpJump) to not follow their headcanons and instead do whatever they want with them. Because of this, this fanverse is based almost completely based on the concept of Depending on the Writer and everything is different in every interpretation. These differences encapsulate everything from the number of kids, who the kids are, their personalities, their age, how they were conceived, where they live, and an infinite number of etcéteras. Nothing is set in stone and changes are made from person to person.

Everything listed in this article comes from the most popular, influential or interesting works in the fandom. So take every single trope with a grain of salt, as anything and everything can change whenever a more influential fanfic or comic comes out.