Literature / My Favorite Band Does Not Exist 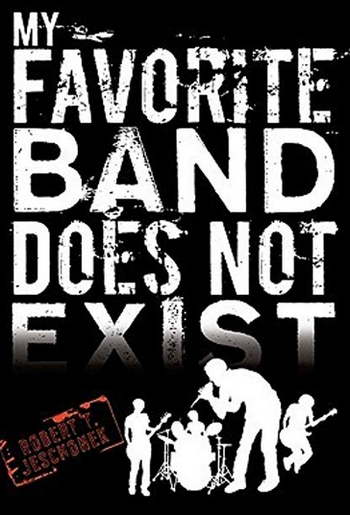 My Favorite Band Does Not Exist is a Young Adult Urban Fantasy novel by Robert T. Jeschonek. It tells the story of a teenage runaway named Idea Deity who is convinced that he's a character in a novel and that he will die in the 64th chapter. To pass the time, he has created a fake band called Youforia, complete with a fake website, and fake blog. The phony band gets a lot of buzz and people start spreading rumors about having seen concerts that Idea knows for a fact never happened.

The story also has a second protagonist, Reacher Mirage, lead singer of the secret rock band Youforia. Reacher suffers from crippling Performance Anxiety and as such is unable to perform in public. All of his concerts are performed with a curtain in front of the band. Reacher knows nothing of Idea's existence and has absolutely no clue who is leaking what he thought was secret information to the public.

Much of the story focuses on the collision between the lives of these two characters, driven by Idea's effort to find who is "stealing" his creation and Reacher's effort to find the person leaking information about his band to the public. As one might expect, things start to get strange when the two of them meet.