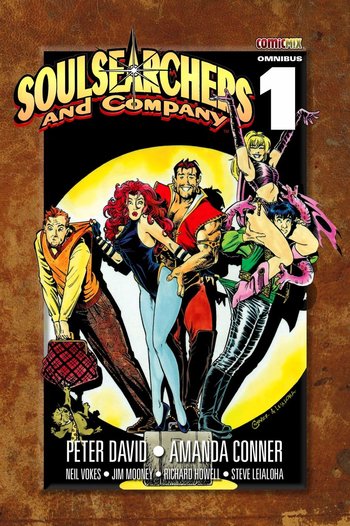 The Soulsearchers and Company series is a comedy/horror/fantasy comic book from Claypool Comics ran from 1993-2007, with a total of 82 issues, 1/2 of a Free Comic Book Day flip book, and two trade paperback compilations with new covers by Amanda Conner (one inked by Steve Leialoha , one a painting).

Soulsearchers and Company began as a transplant. Richard Howell and Peter David had put together a series concept for Marvel Comics featuring a team of ghostbusters led by two already-extant, already-married characters. (Comic Book Resources says

Hellcat and Hellstorm, pointing out Howell had already written a pilot for this in Marvel Fanfare.) Marvel passed on the offer, so Richard and Peter refashioned the cast to make the property creator-owned, then began it from scratch, at Claypool The group's members included: the fiery former Olympic gymnast Bridget Lockridge; her foil (and eventual husband) Baraka, the fire demon from an Arabic Hell, the apprentice witch Kelly Hollister; Janocz, a shape-changing gypsy boy; Peter P. Peterson, an accountant with a magic bag (out of which he can produce—apparently—anything); and the business' original leader, the acerbic talking prairie dog Arnold Stanley. In later years, the centauress Hot-2-Trot would join the ranks, then leave. Also signing up was Gabriel, a local Mystic Grove boy who was gifted—by Nadine the ditzy angel—with a gun that disabled evil supernaturals.

Naturally, a concept like this required some specialized art to make it work, and Richard and Ed were each delighted to recruit the then-lesser-known Amanda Conner (whom they'd known for years). Amanda's big breakthrough was still a few years away, but she sharpened her skills markedly on the Soulsearchers and Company feature, bringing a complex sense of fun and a multiplicity of tone to the series' many demands.

Over the years, the Soulsearchers and Company feature shifted art teams frequently, eventually showcasing the talents of not only Amanda and Jim but also Dave Cockrum, Marie Severin, Dan Spiegle, Gordon Purcell, Neil Vokes, Al Bigley, Kim DeMulder, and Chris Marrinan , among others. As the series progressed, it stabilized artistically with a lengthy run by John Heebink and Al Milgrom , then a slightly shorter one by Joe Staton and Milgrom. Amanda Conner remained as cover artist for the series' entire run, mostly inked by Steve Leialoha.

Over their fourteen-year run, the Soulsearchers discovered plenty of amusing weirdness in their path, including: The Grand Guignol and his Pinocchio Patrol, Sleep-Wanker the master of daffy dreams; the roving gypsies of Pastramia; the Toadies and their cult of Drek; the Scream Queens; the time-warping Apocrypha; authoress Ramona Cleff; mad sorcerer Willem Haggard (Arnold's original partner in SS & Co.); and the Ex-Nihilio, Lucifer's executive board. They participated in a cat-and-mouse game with the spy queen Offa Trollez, investigated a monastery full of mimes, got in between a pair of warring angels (Nadine and her nasty sister Vanessa), found the underground laboratory in which a Mad Scientist was creating dinosaurs, fought the greedy pig Sooey Generis, got outlawed from Mystic Grove, battled the Witch-Tracker, attended a snooty, aristocratic British (also cursed) house party, and ran afoul of the Cantrip mob family of half-demons.

Tropes used in Soulsearchers and Company include: