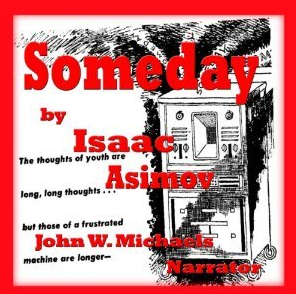 First published in Infinity Science Fiction (August 1956 issue) by Isaac Asimov, this is a Science Fiction Short Story about two boys and a computer-generated storyteller.
Advertisement:

Eleven-year-old Niccolo Mazetti is dealing with a really boring day by pulling out his old Bard, a computer that takes Fairy Tale clichés and creates new tales every time you start it. It's a rather efficient device, but Niccolo has had it for years and listening to it again is almost enough to make him cry from boredom. Luckily, his friend Paul Loeb has decided to come over and share an idea.

Interested in the Bard, Paul asks Niccolo about the old computer, bragging that he will be getting a new/late-model Bard with visual attachments and sci-fi/mystery plots. Impressed with his own knowledge, Paul decides to fix Niccolo's Bard by combining it with a book he has on modern computers. That way, the stories should be new and relevant rather than old and strange.

While the Bard and the book are talking to each other, Paul explains about "squiggles". Squiggles are drawings that represent ideas, like numbers and names. Niccolo doesn't quite understand the point, but Paul convinces him that writing could be a code for a secret club.

Excited about the club, they take the computer book out of the Bard and listen to part of another story before turning it off again. Adding the computer stuff didn't change the genre, so they leave the Bard and go to Paul's house. The Bard is jostled as they go, and begins one more story, about a Bard that gets mistreated by his owners.

Examples of tropes within Someday: