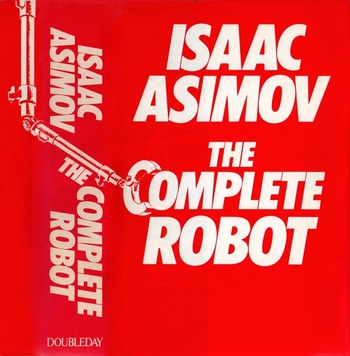 My various robot short stories have appeared in no less than seven different collections of mine. Why should they be so separated? Since they appear to be far more important than anyone dreamed they would be (least of all, I) at the time they were written, why not pull them together in a single book?
—Dr Asimov, Introduction
Advertisement:

First published in 1982 by Dr Isaac Asimov with Doubleday, this collection contained every Short Story within his overall Robot Series. At least, that was the implication. Aside from the fact that he would write at least a half-dozen more short positronic robot stories, it only contains three Multivac stories ("Point of View", "True Love", and "...That Thou Art Mindful of Him!"). Nor are all of these robots, even if they have a positronic brain, Three Laws-Compliant! "Sally" and "The Tercentenary Incident" both contain positronic robots that have the ability to kill humans. Still, this volume remains one of the most complete collections if you just want to read about robots.

The Complete Robot is split into several sections, based around a certain theme or setting detail, such as Dr Calvin or Powell and Donovan. Each section has a short blurb summarizing Dr Asimov's thoughts about the section and their personal significance.

Advertisement:
Stories in the collection

This book has also been republished in an Omnibus called The Robot Collection, which adds The Caves of Steel and The Naked Sun.

The Complete Robot provides examples of: