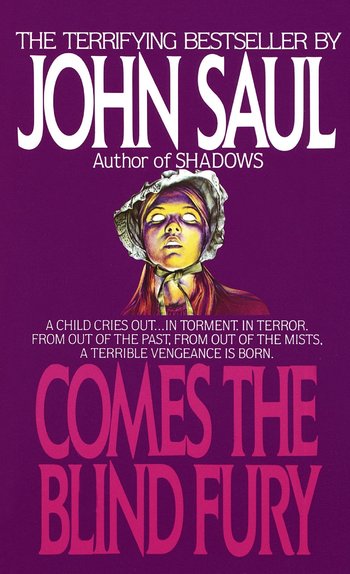 Comes the Blind Fury is an extremely creepy 1980 horror novel by John Saul.

Exactly Exty Years Ago in the charming small town of Paradise Point, a gentle blind girl took a walk along the seaside cliffs near her home and vanished forever. Was it an accident? Suicide? Or did it have something to do with the cruel schoolchildren who taunted her until she lost her sense of direction?

In the present day, Dr. Cal Pendleton, his pregnant wife June, and their adopted twelve-year-old daughter Michelle come to Paradise Point, where they live in a Big Fancy House overlooking the sea. But strange things have occurred ever since they arrived, such as the disgusting stain in June's art studio that can't be scrubbed away, or the mysterious, disturbing paintings that appear on her blank canvases each night, or the antique doll that Michelle finds in the attic.

Things take a turn for the worse when Michelle falls over the edge of a cliff and injures her hip. Her disability, coupled with her new and uncharacteristic resentment over it, causes her few friends to abandon her while the other children in town mock and avoid her, leaving her lonely and even more bitter. Even her parents seem to forsake her in favor of their newborn daughter. Now she has no one but her doll Amanda.

But there's another friend, one who only comes on misty nights. One only Michelle can see. Her name is Amanda, too, and she wants to look through Michelle's eyes to see everything she's missed throughout the past one hundred years. In exchange, Amanda will make sure that anyone who makes Michelle unhappy will be very, very sorry.

Soon the town children begin dying, one by one, in grisly accidents. Soon there will be no one left to blame but Michelle, who is always at the scene of each death. Soon Michelle will have to run.