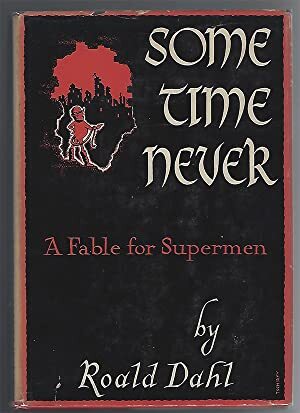 Nowadays the world is filled with people who have killed in the war. None of them ever feels guilty, however they wouldn't hesitate to report a fellow men if he were to cheat at cards. I am a peoplekiller. I've tried to feel guilty, but I can't seem to make myself. I would feel very guilty if I cheated at cards.
—Dahl, on the "Supermen", i.e., soldiers around the world
Advertisement:

Sometime Never: A Fable for Supermen is a 1948 Science Fiction novel by Roald Dahl, and quite possibly the first post-World War II novel to address the shiny new possibility of full-scale nuclear war.note Though shorter stories had been doing that since at least 1946 - see this

Captain Marvel comic, for one. The plot is divided into two parts, the wartime adventure of RAF pilot Peternip during the Battle Of Britain and the plan of the Gremlin Leader to outlive humanity in an alternative Cold War. It is the most obscure of Dahl's books, but still can be found in some libraries in the U.S and Britain.