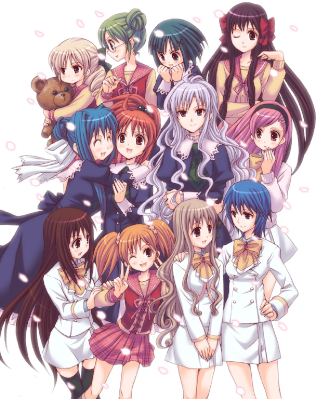 Something for everyone.
Advertisement:

A bishoujo series, however, is a more loaded term. They are Fanservice series aimed towards male audiences. These series will use highly attractive female characters (often of The Beautiful Elite variety, although this is not necessary) up to about twenty-five years old whenever possible. This is especially noticeable in a series where male characters and older women make unusually few to no appearances, even if the story's setting and premise would suggest otherwise.

Lately, among fans, it often takes a self-derogatory tone. Many bishoujo series blatantly appeal to male audiences with pandering tropes, causing large amounts of Values Dissonance that help cement the otaku stereotype. Adding a guy to the mix ironically just gets it labeled as a Harem Genre story.

When a series of this kind does attract Fangirls, the series often loses this term. Compare and contrast Shōjo Demographic and Magical Girl, in which there are cute girls, but the target audience is female. Also contrast Puni Plush, Gonk, Hunk, Bishōnen.

Improbably Female Cast is a Sub-Trope.

This is an East Asian media only trope. Please do not put Western examples here.