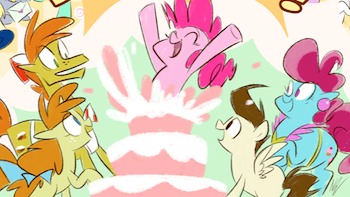 Slice of Life is a My Little Pony: Friendship Is Magic Ask a Pony blog and webcomic. It is written and drawn by noted Pony fan artist Egophiliac.

As the title suggests, this is a slice of life comic focusing on the lives of the Cake family — Mr. and Mrs. Cake, their twins Pound and Pumpkin, and Pinkie Pie. The comic is set several years in the future of the series, when the Cake twins have grown up to about the same age as the Cutie Mark Crusaders are in the current series. Trials and tribulations include collecting candy on Nightmare Night, the fears of flight camp, sibling rivalry, and dealing with the wackiness of the denizens of Ponyville (and Pinkie Pie).

As of late 2014, the blog is on indefinite hiatus; Egophiliac has put it to rest for the foreseeable future. The comics are currently available here