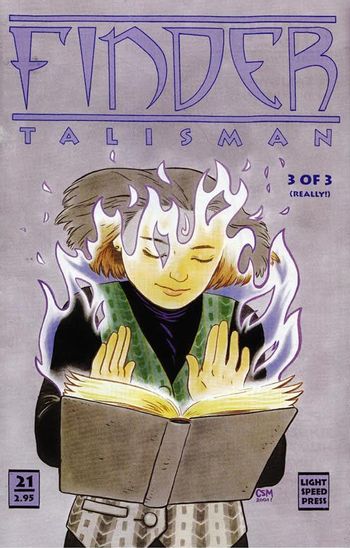 "It's nice, living in a city. No rain, no snow, no cold wind, no hot summer. No three different wardrobes to keep up with. Air scrubbers on every corner, and all the sun you want from the streetlamps. No bugs in your food and no rats in your walls and no big crime surge after dark because there isn't any dark. Just shut off your windows when you decide you've had enough. Hours and days and weeks , nice neat and dependable, and tons of tings going on to fill all those hours up, and a nice quiet nest to retreat back to. No more neighborhoods out in the open with big walls around them and razor wire and broken glass on top of 'em. No more armed guards and gunfire at night. No more living in a glorified root cellar because we're too afraid to live in the house itself. Everything above ground and I don't just mean the buildings."
— Rachel
Advertisement:

Strange creatures, Lost Technology and bizarre customs regularly crop up in rich detail, but they're all eerily familiar and serve as the backdrop to tales of love, hate, confusion and seeking.

Think of it as Slice of Life Embellished, with the embellishment cranked Up to Eleven, then taught to play nice and not upstage Slice of Life. The stories are focused on (or at least tangentially related to) Jaeger, a member of the title order of Finders.

Has nothing to do with The Finder tv series.