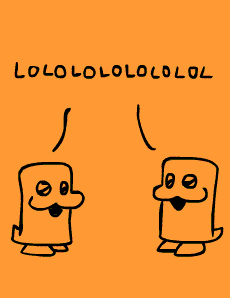 The Comic Adventures of Left & Right

is a dada webcomic by chickensnack. It is about two friends, Left and Right. Needs a Better Description than the self-described LEFT AND RIGHT

IS A COMIC ABOUT FRIENDS because we're still at a loss on how to describe it in general.