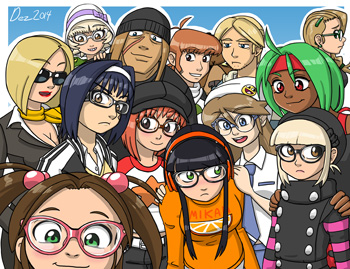 is a slice of life webcomic by Etienne Dez, starting in March 2013, about an ordinary everyday girl surrounded by weirdos. Or is it the story of an lonely, introverted woman living in her own imaginary world, struggling to deal with those intruding into her life? Could it about a superhuman fighter experiencing some difficulties adjusting to everyday life? Or the story of an obsessive fan-girl and her eternal quest for love? It might even be about a black ops agent trying to mingle with normal people...

Updating every Monday, Frivolesque follows the Japanese 4-Koma format and is about the everyday life of five different girls with different backgrounds created by Etienne Dez along the years. The grounded optimist Chloé, the quiet introvert Flore, the obsessive fangirl Marie-Neige, the fighting tomboy, Gaia, and the secret operative, Saki.