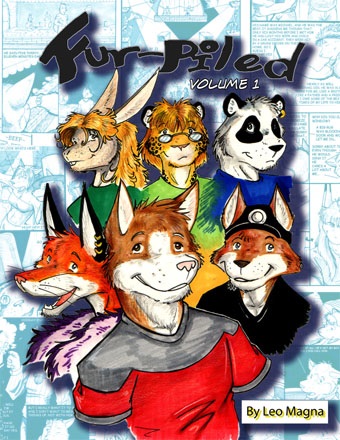 Fur-Piled is a gay-themed, Slice of Life Furry Webcomic by Leo Magna. It stars Arthur Husky and his group of friends and the trials they endure in their day-to-day lives.

The comic begins with Husky introducing the reader to his hometown of Santa Monica, California, which, while a small town on its own, is right next to Los Angeles, where most of the characters spend most of their time. However, his down-time is cut short by his friend Ian, who is a girl by the way. Husky and Ian talk about his Love Interest, Saetto, and then heading to the club to meet up with their other friend Andy. The story then goes from there, splitting into different plot-lines, focusing on Husky's friends and their relationships and problems.

Despite every character being an anthropomorphic animal, there are very few references to that outside the occasional species naming and usage of tails sticking up instead of a character's butt.

Fur-Piled started in 2004 and ended in 2011, and it won the 2008 Ursa Major Award for the Best Anthropomorphic Comic Strip.

(as of April 2019, the original website appears to be down, and can only be accessed via the Wayback Machine), and printed versions published by Sofawolf Press, which have some extra content, can be found here.