Video Game / My World, My Way 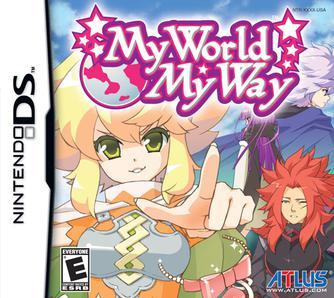 For all her life, Princess Elise has had everything she wanted handed to her on a silver platter - a fancy castle, the finest of dresses, and lots and lots of money. She eventually bumps into a handsome adventurer (whom she describes as "Level 99 in handsome") at a royal ball, expecting him to praise her and wait on her hand and foot. It didn't quite work out that way, as the adventurer blows her off for being too spoiled for her own good.

Still determined to win him over, Elise sets out on a journey in search of fame, fortune, more fame, and the chance to get him to fall in love with her by growing out of her "me-me-me" ways.

...just kidding. That would be too easy. Since this is My World, My Way (her words), fighting, questing, and especially pouting are the only reasonable paths to victory in this 2009 Nintendo DS game. It goes as far as having menus dedicated to this.

My World, My Way contains examples of: