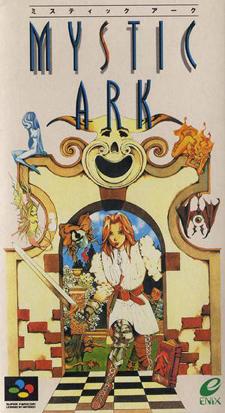 You wake up as a wooden figurine.
Advertisement:

The Creator-Driven Successor game to Enix's infamously difficult RPG The 7th Saga, released in 1995. Released only in Japan, Mystic Ark is both similar to and different from its predecessor at the same time. Though retaining the GPS-map and combat system as well as a similar art style, the overworld gameplay is very puzzle-oriented and almost like a Point-and-Click Game.

Our hero is alone on an island, talking to a goddess. The island is filled with wooden figurines. How did our hero get there? What power has turned these people into wooden figurines? For what purpose? Where is this island, and why does it hold so many gateways to other worlds? Why is the fireplace talking to you? If you desire the answers to these questions then strap yourself in, because you have an exceptionally surreal journey ahead of you.