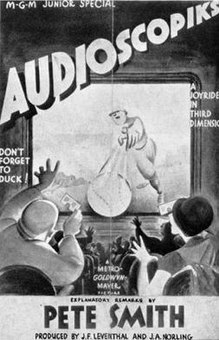 Audioscopiks is a 1935 short film (8 1/2 minutes) directed by Jacob Leventhal and John Norling.

It was produced by Pete Smith as one of his Pete Smith Specialties for MGM. In this one Smith demonstrates then-new 3-D technology. The first part of the movie is basically a short science documentary, as the film demonstrates how depth perception is created by having two eyes that each have a slightly different field of vision. Losing an eye robs you of depth perception, pushing on an eyeball causes one to see double as coordination between the eyes is broken, and intoxication does the same.

The film then demonstrates the 3-D camera and how it uses two different lenses to take two different pictures. Having done that, Pete Smith, the narrator, tells the audience to put on the 3-D glasses they've been given. The second half of the movie is a continuous series of shots dramatically demonstrating 3-D technology—a woman on a swing, a trombone player pointing his trombone at the camera, a woman blowing up a long balloon at the camera—concluding with a dramatic high-speed car ride through New York City.

One of the first 3-D movies ever commercially exhibited, although it was proceeded by a 1922 feature called The Power of Love. Smith produced another 3-D short in 1938 and another in 1941, but 3-D didn't catch on until the 1950s when Hollywood was trying to compete with television.