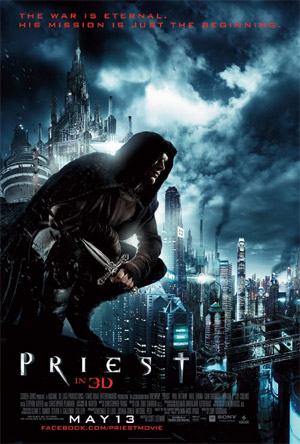 A 2011 action film, very loosely based on the manhwa of the same name.

For most of recorded history, mankind was at war with a race of nocturnal predators known as vampires. While humanity possessed the advantage of technology, the vampires were faster, stronger, and at least as numerous as their human prey, and over centuries of conflict, humanity slowly lost ground against its ancient enemy. In order to avoid extinction, humanity retreated to heavily-fortified cities, living under the protection and guidance of the Church; meanwhile, the war against the vampires continued without end, eventually reducing much of the world to a blighted, radioactive wasteland. However, all this changed when the Church discovered a new weapon in their fight against the darkness: exceptional men and women with the physical prowess to defeat vampires in personal combat. Known only as "priests," these heroes allowed humanity to finally win the war against their blood-sucking foes.

In the years following the end of the war, the remaining vampires have been herded onto guarded reservations, while the priests have disappeared into obscurity, attempting to re-integrate into a society that really has no place for them. However, rumors still persist that the vampire menace has not been completely eradicated, despite the Church's attempts to quash them. And when one retired priest hears word that his niece has been kidnapped in a vampire raid, he will do whatever it takes to get her back, even if it means defying the will of the all-powerful Church....