Film / Pride and Prejudice and Zombies 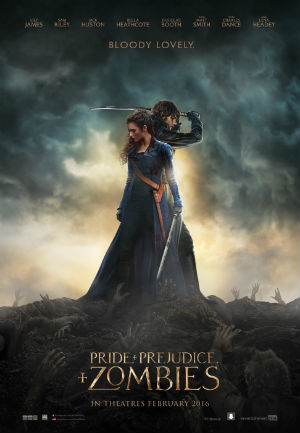 "It is a truth universally acknowledged that a zombie in possession of brains must be in want of more brains."
The 2016 film adaptation of Seth Grahame-Smith's Austen parody Pride and Prejudice and Zombies directed by Burr Steers and produced by Natalie Portman. The film stars Lily James, Sam Riley, Matt Smith, Lena Headey, Charles Dance, Jack Huston, which diverges quite sharply from the... for want of a better word 'original' text of Pride and Prejudice and Zombies by focusing far more on the world of Regency England now beset by a Zombie Apocalypse, causing some quite substantial alterations to the plot and characterisation as a result.
Advertisement:

Following Colonel Darcy's failure to prevent the slaughter of the inhabitants of Netherfield Park during a whist-party, due to the hostess's refusal to tell him of a second potential zombie infectee, the place is acquired by Darcy's friend Captain Bingley, much to the delight of Mrs. Bennet, and the indifference of her husband and eldest daughters, who are rather more concerned with their potential survival than their matrimonial prospects. At their first meeting at the Meryton assembly, Darcy succeeds in mortifying Elizabeth's pride, only to rapidly change his mind upon seeing her prowess in combat. Elizabeth, however, despises him, which is only encouraged by the arrival of Lieutenant Wickham, who tells her of the great wrong Darcy has done him.

That is about as close as the text sticks to the original Pride and Prejudice.