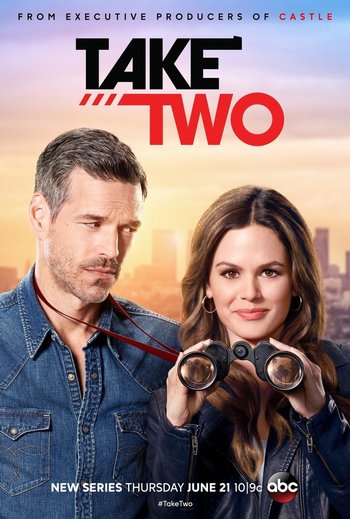 Take Two is an ABC Police Procedural that launched on June 21, 2018 for 13 episodes.

Samantha Swift (Rachel Bilson) spent eight years starring on the hit cop TV show "Hot Justice." But the same week her show was canceled, her actor boyfriend dumped her on the red carpet after she discovered he was cheating on her. This sent Samantha on a wild binge of drinking and partying and ruined her career.

Fresh out of rehab, Samantha decides to research a comeback role of a private eye. Her agent hooks her up with Eddie Valetik (Eddie Cibrian), who's not happy. Samantha accidentally helps Eddie solve a case and the resulting publicity convinces him to hire her on as his partner where her acting skills and "experience" playing a cop (along with her celebrity connections) helps them out.

ABC announced in November 2018 that the show was cancelled.