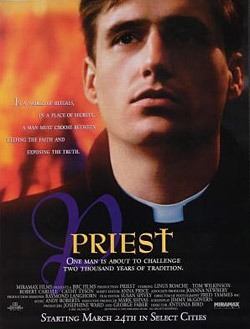 A 1994 British drama film directed by Antonia Bird, with a screenplay by Jimmy McGovern.

As Father Greg Pilkington (Linus Roache) arrives in his new parish in Liverpool, he is shocked to discovers that Father Matthew Thomas has a (sexual) relationship with the rectory housekeeper. Father Greg struggles with his homosexual feelings and embarks on a relationship-of-sorts with Graham (Robert Carlyle).

During confession, a young girl tells Father Greg that she is being abused by her father, who later confirms it. Since he believes the confidentiality of the confession covers everything he hears in the confession booth, Father Greg feels he cannot tell the authorities about the abuse.

The combination of issues lead Father Greg to question the faith he has based his life on.