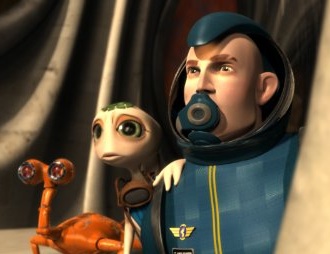 Battle for Terra, originally known simply as Terra in the US, is a 2007 Speculative Fiction CGI movie about an invasion by advanced and hostile aliens, a dangerous friendship, the ties of family, and the hard choice of doing what's right and the survival of your race. Oh, and we're the godlike invaders.

The planet Terra is home to a race of peaceful, floating aliens who celebrate life and live in harmony with nature, but everything is not as cheerful as it seems. Mala (Evan Rachel Wood) is a mechanically gifted and rebellious girl who questions their society's restriction on science and the Forbidden Zone. After an ominous eclipse, space ships descend and abduct several of the Terrians who mistake them for gods; among the abducted is Mala's father (Dennis Quaid). This prompts her to try getting abducted herself, leading to a dangerous chase as she catches the attention of Lt. Jim Stanton (Luke Wilson). After a harrowing pursuit, she outmaneuvers him into a wind tunnel and his ship crashes.

Mala takes him to her home, and with the help of his Robot Buddy, Giddy (David Cross), keeps him from being suffocated in Terra's atmosphere. Stranded, Jim agrees to help Mala find her father in exchange for help returning home. Things only get more complicated for the two as friendship, loyalty, and family set them and their people up for a devastating battle that could wipe out one of the two races.

A compact and entertaining movie, it doesn't pull its punches when it comes to the death involved in such a conflicting plot. It boasts a mixed cast of famous film stars and voice actors, with solid performances all around. A pity that the marketing was practically nonexistent, and few people were aware of the film when it came out. Despite its modest budget and slim runtime, it's a very underappreciated and surprisingly complex film that's highly worth a watch for science fiction fans and casual audiences alike.

Has nothing to do with Toward the Terra.