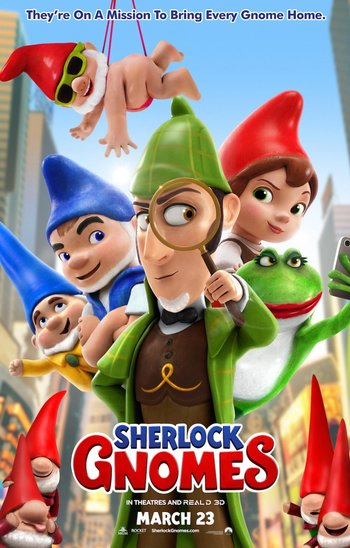 They're on a mission to bring every gnome home.
Red Goon Gnome 1: Prepare for a tale of suspense, intrigue, and mystery.
Goons 2 & 3: Ooh! Mystery.
Goon 1: Prepare for Sherlock Gnomes.
— The red goon gnomes starting the movie
Advertisement:

Sherlock Gnomes is an animated computer-animated film that is the sequel to 2011's Gnomeo & Juliet, released on March 23, 2018. Produced by Paramount Animation as its first fully-animated film—as well as the first to not use Nickelodeon's name—and Metro-Goldwyn-Mayer as its first animated feature in an entire decade since the release of Igor, with animation by Mikros Image (The Little Prince, Captain Underpants: The First Epic Movie).

The film follows Gnomeo (James McAvoy) and Juliet (Emily Blunt), who, after their beloved friends and family are missing, must receive help from Sherlock Gnomes (Johnny Depp) and his right-hand man Gnome Watson (Chiwetel Ejiofor) from suffering death from Sherlock's Arch-Enemy Moriarty.

Any tropes related to this film's characters must be moved to the character page.

"I hate you, Sherlock Gnomes."