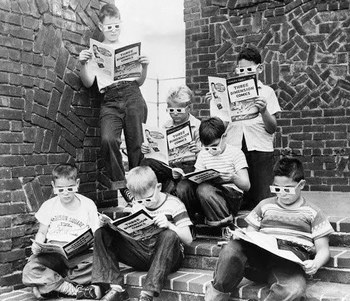 The 3D comic book began as a brief fad slightly after the start of the 3-D Movie fad, in 1953. The first 3D comic book was Three Dimension Comics and starred Mighty Mouse. After that, many different comics came out, but they only lasted one or a few issues; the comics were expensive (25 cents when others were 10 cents) and sold mostly as novelties, which got old quickly. By the end of the year, the fad was dead.

The next 3D comic book fad was in the late 1980s, a few years after the next 3D movie fad. Three-dimensional comic books were generally limited to independent publishers such as Eclipse Comics and Blackthorne — not Marvel, or DC. They were released as specials, not ongoing series. This fad lasted longer than the 1953 fad, but eventually 3D comics faded away again.