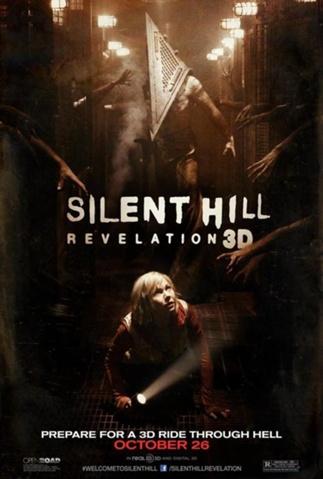 I wouldn't look behind you right now.
Advertisement:

The sequel to Silent Hill, released in 2012 in 3D. Written and directed by MJ Bassett (Solomon Kane), it is influenced by the third game in the series.

Six years after the first movie, 18-year-old Sharon Da Silva, now calling herself "Heather Mason" (Adelaide Clemens) is forced to go to the infernal town of Silent Hill to find her father, Christopher / Harry Mason (Sean Bean), after the Order of Valtiel kidnaps him. Upon arriving in Silent Hill, Heather is drawn into a strange and terrifying alternate reality that holds answers to the horrific nightmares that have plagued her since childhood.

The cast includes Adelaide Clemens (as Heather Mason), Martin Donovan (as Douglas Cartland), Kit Harington (as Vincent Cooper), Carrie-Anne Moss (as Claudia Wolf), and Malcolm McDowell (as Leonard Wolf). Also returning from the first film are Radha Mitchell (as Rose Da Silva), and Deborah Unger (as Dahlia Gillespie), though their roles in Revelation are smaller than before.