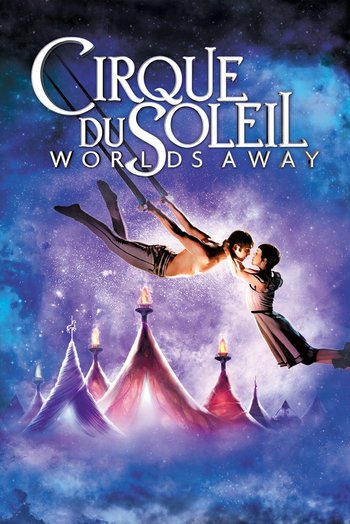 Cirque du Soleil: Worlds Away is a 2012 3-D Movie produced by James Cameron and directed by Andrew Adamson.
Advertisement:

A young woman named Mia goes to a run-down old circus and sees a performance by an acrobat known as the Aerialist. During his performance, he misses a trapeze and falls into the sand below — then through it. Mia rushes to help but gets sucked through as well, and finds herself in a...rather different universe. Now separated, the two of them search through various "worlds" looking for each other, sometimes being helped by the curious inhabitants, and sometimes being hindered by them.

Brushing aside this Excuse Plot, this movie is a highlight reel drawn from seven Cirque du Soleil productions that were running in Las Vegas, Nevada at the time of shooting. (Five are still running; Viva Elvis closed a few months prior to the film's release, and Zumanity never came back after shutting down for the COVID-19 Pandemic.) These shows, unlike Cirque's tours, have never been filmed for the home video market (KA was shot for a few European television airings) owing to agreements with the casino resorts that host them. The film thus serves as a sampler platter of shows that most audiences wouldn't have a chance to see otherwise and a promotional tool.

The shows represented are: