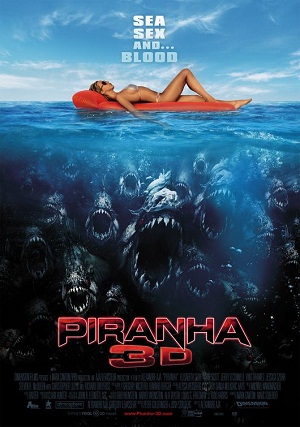 Piranha 3D is a remake (In Name Only, actually) of the 1978 original, directed by Alexandre Aja.

Set at Lake Victoria (a fictional version of Lake Havasu, Arizona), a minor earthquake opens up a chasm that connects the lake to a larger subterranean one. The local sheriff (Elisabeth Shue) escorts a trio of scientists (Adam Scott, Dina Meyer, and Ricardo Chavira) to explore the underwater cave, while her chief deputy (Ving Rhames) is left to oversee the chaos of Spring Break. However, thousands of prehistoric piranha that have outlived their species' extinction by millions of years are now able to escape to the surface, eating two of the scientists, and then making their way towards the town's very active beach.

Also filling out the adult cast are Jerry O'Connell (a Girls Gone Wild-esque producer/director), Christopher Lloyd (a marine biologist pet shop owner), and Richard Dreyfuss (a local fisherman who is the first to get eaten). As incredible as it may seem, the film actually got mostly positive reviews, for being realistically scary, but also indulged in its B-Movie roots. Two years later, a sequel was released, Piranha 3DD.