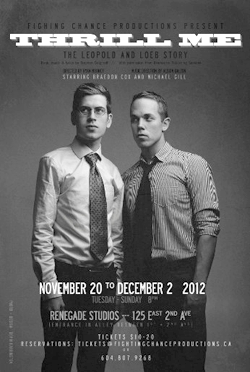 Relationships can be murder...
Nathan Leopold: Nietzsche? When did you become interested in philosophy?
Richard Loeb: When I discovered that I am a textbook Superman.
Advertisement:

A two-man musical by Stephen Dolginoff, based on the real-life teenage "thrill killers" Nathan Leopold and Richard Loeb, who murdered a twelve-year-old boy in 1924 Chicago pretty much just to prove that they could. The story is told by Leopold at his parole hearing years later, as he attempts to show the parole board that he was only going along with Loeb, his lover and best friend. (The real Leopold was successful in his attempt to be released, as he is in the end of the show, and lived an uneventful life as a florist after marrying a woman on the outside.) Three cast recordings have been released.

The score is notable for its spareness- two singers and a piano, though the piano arrangement was made more delicate and complex for the 2006 production. This remains the official version.