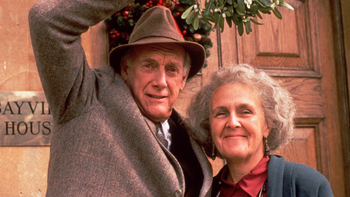 The two principals. Left - Graham Crowden as Tom Ballard. Right - Stephanie Cole as Diana Trent
Tom Ballard: [about Diana] Your smile is like a crack in the gates of hell. One can smell the sulphur and hear the screams of the damned through your smiles.
Advertisement:

Broadcast between 1990 and 1994 on the BBC, Waiting for God was a British sitcom that ran on BBC1 for five series. It, like many Brit Coms of the time was set in an institution of some kind, in this case Bayview Retirement Village, near Bournemouth.

The main character is the ever cynical retired photojournalist Diana Trent, who spent her working life documenting the most momentous and dangerous events of the times. The story mostly focuses on her relationship with Tom Ballard, a retired accountant who seems to have lost most of his marbles, though to what extent he plays it up isn't quite clear. Diana has retired to Bayview because she lacks any relatives aside from her niece, and Tom because his son and daughter-in-law have finally tired of his antics and want him to move out of their house.

Diana's frustration at the prospect of years of being alternately patronised and ignored at Bayview is vented at the management of the retirement home (the sleazy Harvey Baines and the mousy Jane Edwards) and Tom's ungrateful family, seeking to score moral victories against them at every opportunity while blackmailing the managing directors of Bayview to prevent them throwing her out. Her niece has a much better relationship with her than Tom's family has with him, but the relationship is distant and rather one sided with her niece doing most of the work.

Tropes in Waiting For God