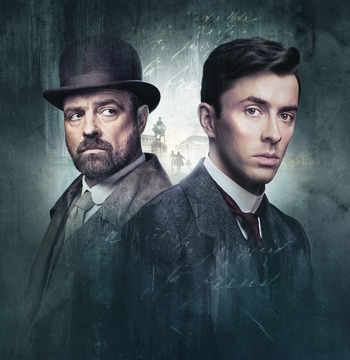 Vienna Blood is a BBC limited series that has run so far for three seasons, since 2019, lasting three 90-minute episodes each. (When it ran in the United States on PBS the episodes were shown in two parts, making a total of six per season.)

It is a series of detective dramas, based on the Liebermann Papers series of novels by Frank Tallis. The setting is Vienna, Austria in 1906 and the years immediately after. Franz Joseph is emperor of the Austro-Hungarian Empire, Adolf Hitler will soon come to town to study art,note Hitler came to Vienna in 1907 and lived there for six years and World War I is just a few years away. Max Liebermann (Matthew Beard) is a British-born medical student whose family moved to Vienna when he was young, and serves as an intern in a mental asylum. After attending a lecture by Sigmund Freud Max becomes an instant convert and proponent of the new science of psychiatry.

Max is interested in the intersection of psychiatry and criminal investigation. He gets his father to pull some strings and has himself inserted into the Vienna police, where he is attached to Inspector Oskar Reinhardt (Juergen Maurer). Reinhardt is an intense, driven man, haunted by past tragedy, pushed by demanding superiors. He takes an early dislike to insufferable know-it-all Max, but sure enough, they eventually form an effective partnership.

The Liebermanns are Jewish, and the anti-Semitism of early 20th-century Vienna is a running theme. Conleth Hill plays Max's father Mendel, a wealthy clothing merchant who is trying to gain entry into upper-crust Viennese society. Jessica De Gouw appeared in the first season as Amelia, a chemist whom Max is attracted to. (The role was recast with Lucy Griffiths for Season 2.)

Season 2 ran in December 2021. This season is set in 1907, and finds Max having set up his own practice as a psychologist. This season's episodes were:

Season 3 (2022): Set in 1908. Max has made enough of a reputation in the field of psychology that he's published a book and is giving book signings. Meanwhile, he's still drawn to Clara, who is starting a career of her own as a reporter. Oskar gets a love interest in the person of Therese, a middle-aged single mom that he meets in the course of an investigation.