Series / Saved by the Bell: The New Class 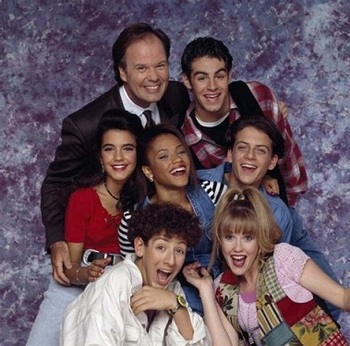 Saved by the Bell: The New Class is a Spin-Off of Saved by the Bell that aired on NBC from 1993 to 2000. Focusing on a new group of students, Mr. Belding is still the principal, while former student Samuel "Screech" Powers works as his assistant.

Launched at the same time as The College Years, The New Class might be classified as more of a spin-off than a continuation; with one exception, the entire old main cast has left and are replaced with new students. Unlike the original show, The New Class regularly changed its core cast over the seven seasons. It was also the longest lasting incarnation of the series.

All seven seasons of the series are available to watch on the NBC website.

Now has a character sheet under construction. Please help add to it!