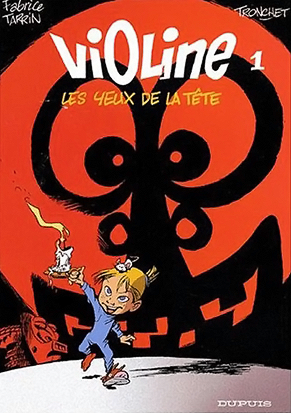 Violine is a French-Belgian comic book series in five volumes, created by Didier "Tronchet" Vasseur and Fabrice Tamin, with Jean-Marc Krings replacing the latter from the third album onwards. The titular Violine is also a recurring character in Spirou magazine.

Violine is a young girl with a special power: a stare from her large violet eyes allows her to read one's thoughts and intentions. She lives in a mansion with her wealthy and domineering mother, Marushka, who is somehow immune to this power. Her mother claims that Violine's father has died when she was three, but after finding evidence to the contrary, Violine embarks to Africa as a stowaway in search for him.

The first album introduces the main character and focuses on her discovery that her dad is not dead but missing. The second album has her travel to Zongo to search for him, in the meanwhile freeing the country from a dictator, but finding that her father has already fled. In the third book, the search continues, at the end of which she finally reunites with Francois, her father. The fourth book is dedicated to Violine's father's backstory involving Marushka and Muller, and how he discovered a fabulous diamond mine that could make Zongo rich. Others are on the hunt for the same diamonds, however. This also starts the search for Violine's disappeared mother... with a twist. In the fifth album, Violine saves President Redder from another attack, and goes in search of her mother in Europe.

The six albums in the series are: