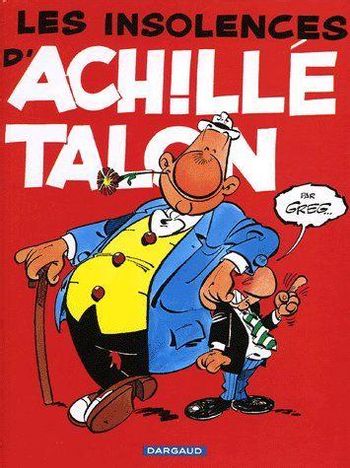 Walter Melon, originally titled Achille Talon, is a French comic created in 1963 by Michel Regnier a.k.a. Michel Greg in Pilote magazine. Originally one-page gags, it turned quickly to two-page gags to which complete 62-page adventures were added in 1974, and continued until its creator died in 1999.

The character is an Homage to Monsieur Poche, a pretentious bourgeois created by Alain Saint-Ogan who's reputed to have created the ligne claire style and whom Greg was such a big fan of that he remade his star characters Zig et Puce just to give some royalties to the poor old master.

Achille Talon, according his author, "knows everything and improvises the rest of it. Apart of this, he's generous, petty, pacifist, aggressive, progressist, bourgeois, selfless, jealous, intrepid and a bit of a coward. In sum, honest and brave just like you and me..."

The comic book was translated for different markets in the 80's and published in English under the title Walter Melon with little success, as it was so specifically French by its main character and its language. Readers hardly understood Talon's favorite interjections, "hop !" and "bof..." which simply express positive/negative moods.

Received a short-lived Animated Adaptation that aired on ABC Family (back when it was Fox Family)note in some English-speaking areas overseas, this show aired on Disney's Jetix (successor to Fox Kids) and on spinoff Jetix Play in which Walter Melon works as a "hero for hire" with his hapless sidekick, Bitterbug. Together, the duo step in for the hero and sidekick in parodies of popular movies, TV shows, works of literature, and, in its second season (which aired in other countries save the United States of America), historical events. The show also had a woman named Amelia, who often played the female roles (often the sidekick, love interest, or Femme Fatale), and a Joker-esque clown named Sneero, who played the villain.