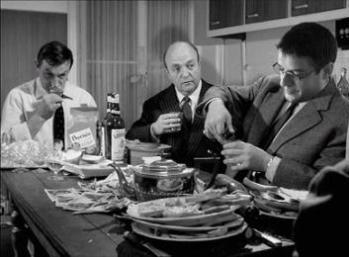 "Still, you gotta admit: it's rather a men's drink..."
"Les cons ça ose tout, c'est même à ça qu'on les reconnait." Translation "Morons dare it all, that's even how you recognize them."
Advertisement:

Les Tontons flingueurs (sometimes known as Crooks in Clover or Monsieur Gangster in English) is a 1963 French gangster comedy film directed by Georges Lautner. It became a national classic due to its memorable dialogues, which were written by Michel Audiard. The cast includes Lino Ventura, Bernard Blier and Francis Blanche.

Fernand Naudin, a former mobster, returns to Paris at the urging of a dying friend, "the Mexican", who appoints him his successor at the head of his criminal gang. However, the Mexican's former lieutenants resent Fernand's promotion and try to get rid of him. But even more problematic, Fernand finds himself saddled with the Mexican's daughter Patricia, a rebellious, flighty and playful teenage girl whom he now has to care for.