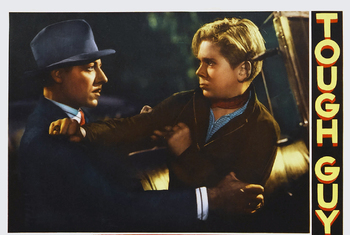 Tough Guy is a 1936 American action film directed by Chester Franklin, written by Florence Ryerson (co-writer of The Wizard of Oz) and Edgar Allan Woolf. It stars Jackie Cooper, Joseph Calleia and Rin Tin Tin, Jr. It was released on January 24, 1936, by Metro-Goldwyn-Mayer.

Freddie, a wealthy young boy, runs away from home with his dog. He hides out in the back of a truck owned by mobsters and winds up witness to a murder. The gangsters want to kill him, but their leader takes pity on the boy when his dog is shot, and they wind up on the lam together.

Freddie's father and the police are trying to find him, and so are the other mobsters.