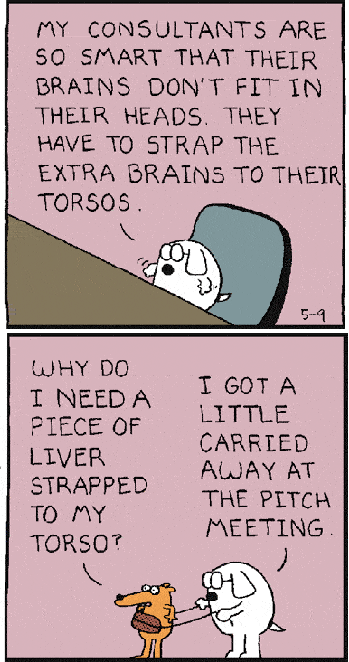 "One of the dangers of any kind of psychological warfare is it can be too effective, and send the target into a paranoid tail-spin. That paranoia can be useful... or deadly."
— Michael Westen, "Wanted Man", Burn Notice
Advertisement:

This is when your bluff backfires not because it's called, but because it convinced so successfully that you'll never hear the end of it.

Alice tries to fend off Bob's unwanted advances by acting Cute and Psycho and it works. Her friend Carol and his friend Dick witness this, and warns everyone introduced to her, "She seems really sweet, but..." Alice catches on that her friends and acquaintances believe she's dangerous, so she tries to convince them otherwise. Of course they agree with her, yet she finds the reputation still spreads, so she tries to confront it more assertively but...why are they flinching away? Gradually, any hint of fear from them gets under her skin, and she visibly struggles (or fails to struggle) not to scream, "I. am. not. CRAZY!"

The trope can also appear when The New Guy Frank meets Alice after she stopped bothering to fight it and let the reputation hang. As an outside observer, Frank is baffled by the claims made about her and the apparent discrepancy from what he perceives, and shares a moment to learn the true Alice. Frank may just ignore the rumors, try to protest against them, or he may play along with if Alice still benefits from them somehow.

Subtrope of Gone Horribly Right. Different from a Snowball Lie, which gains mass until it collapses, a Runaway Bluff gains momentum even without further contributions, and trying to slow it down may just be Digging Yourself Deeper. Compare Becoming the Mask, when your cover bleeds over into your real personality and changes it, I Am One of Those, Too, when somebody you meet coincidentally shares details of your bluff, Springtime for Hitler, when you bank on losing and win, and Unintentionally Notorious Crime, when a crime goes too well and attracts too much attention.