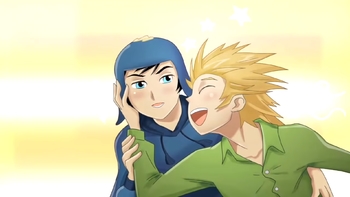 After the South Park Elementary Asian community creates yaoi art, Wendy Testaberger gives a cultural presentation on it — said presentation being art of Craig and Tweek in poses ranging from innocent to explicit. This shocks everyone, not least Tweek and Craig, who find that everyone they meet now assumes they're in love. This includes the adults of the town, who are thrilled to have a young gay couple in their midst.

All of South Park are so in love with their own open-minded tolerance that Craig and Tweek's protests that they're not together fall on deaf ears. Eventually, Craig suggests to Tweek that they 'come out' and then publicly break up to stop the rumors, but Tweek acts his part so well that he gets everyone's sympathy, leaving Craig to face the scorn of the town.

In a subplot, Cartman sends Cupid-Me to put Tweek and Craig back together for fear one of them will try to get with him (unaware that his cupid self has a thing for him). The parents of the titular "couple" also get involved: Tweek's parents think a gay son is just the right accessory and give him cash for coming out, while Craig's dad isn't ready for his son to be gay and has to do some soul searching before he's ready to give his blessing to a couple that may or may not even exist.