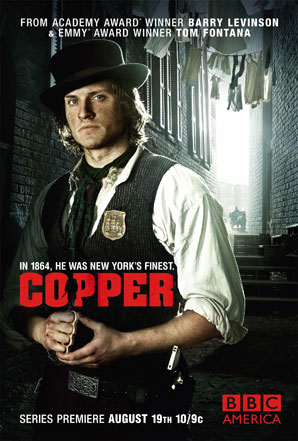 Copper is a historical detective series produced by BBC America and created by Tom Fontana and Will Rokos.

Kevin Corcoran (Tom Weston-Jones) is an Irish immigrant living in the Five Points neighborhood of New York City during the 1860s. He returns from fighting in the The American Civil War to find that his daughter is dead and his wife has disappeared. Robert Morehouse (Kyle Schmid), Corcoran's former commanding officer, uses his family's connections to arrange for Corcoran to be appointed a detective in the New York Police Department.